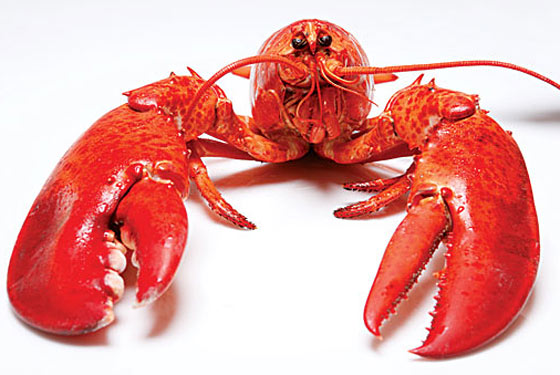 Once upon a time, I talked my mom into getting me a fish tank.  We always lived in apartment complexes in Pittsburgh, so we weren't allowed to have normal pets like cats and dogs.  Nothing I could pet or hug on.  So I decided on getting a fish tank.  But not just any old fish tank.  We like to keep things complicated in our household!  So we got a fish tank with of course, fish and a coupla lobsters.  Yes, that's right.  Lobsters.  Two of them.  They were the ugliest pets you could ask for.  They were see through, to start.  You could see their insides.  All their little organs flopping around.  And they just looked like two big huge bugs crawling around in the tank.  The only pretty thing about the fish tank was the fish we had.  They were silver with a big pink line going down the side of their bodies.  Unfortunately, I would wake up each morning and realize that less and less fish were in the tank.  There were no dead bodies floating around to later flush.  There were just less fish.  So it finally dawned on us that the lobsters were eating the fish.  Those damn see through lobsters.

I'm 8ish.  And I really want some pretty fish to look at.  So after the lobsters successfully finished feasting upon all my pretty fish babies, we went to the pet store and asked the pet attendant what type of fish might be able to outrun these pesky little lobsters.  The lobsters that wouldn't die even if I had fed them nail polish remover.  (Something I never told you, mom.)

So the pet attendant recommended that we get an eel.  Yippie!  An eel!  Eels are cool.  They're graceful.  They're pretty.  And they're fast!  But not fast enough for a lobster.  I remember being sent to bed one night and seeing the most disturbing act an 8 year old might witness.  My eel was apparently not fast enough, but he was long enough that when he happened to swim by my asshole lobster, his tail was grabbed by the jerk of a bug.  So when I went to wish my fishes sweet dreams, I saw the lobster, happily eating the eel from the tail up.  The eel was bashing his head back and forth, trying to free itself from the grasp of my lobster, but there was no use.  The stupid lobster feasted upon the eel in the most inhumane way possible.  And my 8-year-old eyes watched in horror as my last ditch fish was murdered.

And my lobster sat in the corner of the tank smiling, as if he knew he had won the eel challenge.  I don't know what happened to the lobsters.  I imagine my mom never told me that she TOO had been secretly pouring nail polish remover into the tank to kill the evil bastards that scarred her child's love of sea creatures.  But one day they were gone.  The fish tank was packed up, and we went about our merry way.  And still to this day, when I see lobster on a menu, I have flashbacks of the terrified look on the eels face, being eaten from the butt up, while my mean old lobster enjoyed his unagi sushi.  I never gave up loving the taste of lobster, but I will never have one as a pet again.