My mother, my hero 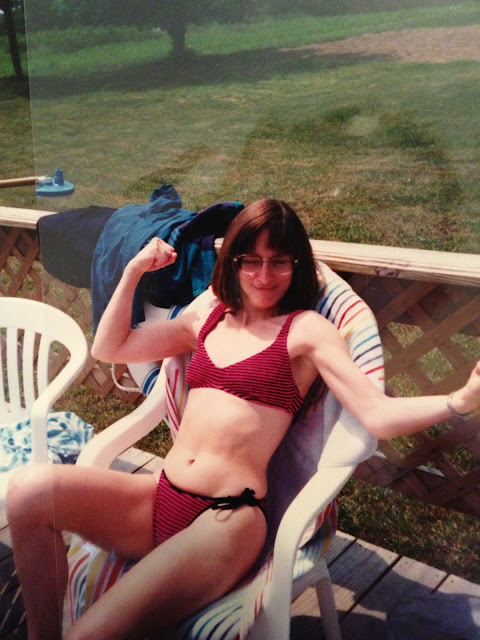 Look at that bangin' little body!  She is about 38 here, mind you!

My mother worked her ass of when we were little.  Well, hell, she works her ass off now.  Always has.  She's a worker bee.  She thrives off it.  And she's good at it.  But when we were little, it was a necessary means to provide for herself and her two crazy little girls!  So she worked a lot.  So much so, that when I had a last minute breakout of chicken pox, and she didn't have time to get a known babysitter, she called a sitter out of the phone book.  The freakin' phone book for Christ sake!  You couldn't pay someone to do that in this day and age.  But she had to work.  A day off was not in the cards back then.  Needless to say, we welcomed our fingerless babysitter into our home to rub Calamine lotion on my back with her stumps, while my mom made dem benjamin's so we could eat and have clothes for school and learn to play the flute (that I never actually learned how to play) that cost an arm and a leg!

When we were little, my sister had a friend named Edie.  Leigh would spend the night with Edie sometimes and when she'd come home, she'd tell us about the elaborate breakfasts Edie's mom would have ready for them when they woke.  Eggs, pancakes, sausage, bacon, the whole shebang.  Breakfast at our house was pop tarts, a bowl of cereal, etc.  Once I heard about this elaborate breakfast Edie's mom would make, we started asking our mom why we didn't have breakfast made for us on the weekends when we woke up.  I think it upset our mom.  She was an awesome mom in every way shape or form.  The only thing I wanted more from her was her time, which she couldn't give us every second of, because she was taking care of us.  I don't fault her one bit.  She was doing what she had to do.  And when she had time, she spent it with us.  And it paid off!  She is the best mom a daughter can have.  Except she wasn't Edie's mom.  Edie's mom bought Edie a monkey.  Yep...a monkey.  Edie had a monkey in her living room.  A monkey that would masturbate.  But a masturbating monkey we did not have!

So it became a running joke in our family.  We'd say, "Edie's mom makes breeaaaaakfast!! (like the whiny little bitches we were)"  To which my mom would grunt, "Well good for her, I'm not Edie's mom."  But one morning we woke to a breakfast of eggs, pancakes, sausage, bacon, the whole shebang.  We were flabbergasted!  We looked at our mom, who was drinking her coffee at the table, reading the newspaper and she looked back at us and said, "Edie's mom stopped by!!"  Damn that woman is fucking amazing.  We got a really good laugh out of that one!  And then after that, every time our mom would make breakfast we'd joke that Edie's mom came by!

I talked to my mom the other day.  She has had my sisters kids for the week, while my sister is learning new and exciting things in the photography world at WPPI in Las Vegas (Like mother like daughter).  My sister is an awesome photographer. Check her out here.  Any ways, my mom called me to tell me that she's been playing Edie's mom all week for my niece and nephew.  She even said she made them smoothies.  I mean seriously?  Smoothies.  I didn't have a smoothie until I was 25.  Where the hell was smoothie-making Edie's mom when I needed her??

(PS - I will one day write a book based on our babysitter experiences alone!)
Posted by Jess at 11:08 AM

This IS Fucking AWESOME!!!

I LOVE this! I literally laughed out loud! I'm officially a follower! Keep them commin!