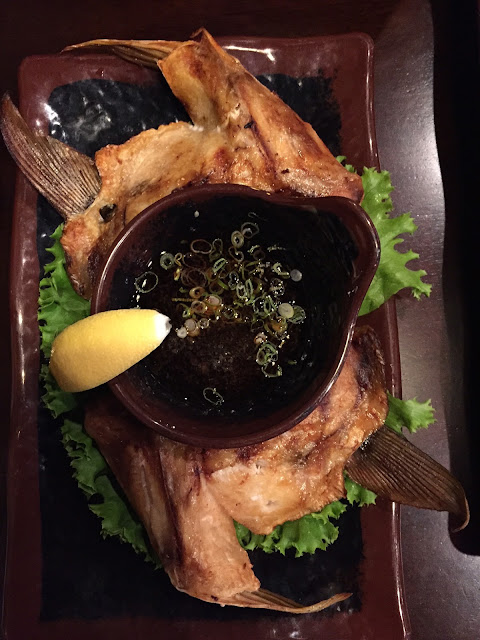 This, my friends, is hamachi kama.  Hamachi kama is the collar of the yellowtail fish, aka Japanese Amberjack. It is my favorite thing to order at sushi or Japanese restaurants. It's usually listed on the menu as Hamachi Kama or Yellowtail Cheek.  If I see it on a menu, I order it. And so should you.

In Memphis, I have seen it on the menus of Sakura (Midtown), Robata, and Sekisui (Midtown).  Sekisui only orders 2 cheeks/day (or so the wait staff has told us) so get there early if you want to try it there.  Robata only sells theirs during dinner (I believe anytime after 5pm).  Sakura knows the awesomeness that is hamachi kama and they don't hold back.  You can order it for lunch or dinner.  And if they think the collar is tiny, they will give you two!

It is fatty.  But not fatty in a bad way. This is delicate fat that melts in your mouth. It's also very meaty. You will be surprised at the way each nook and cranny yields a big old honkin' piece of fish meat. You will think you have finished this delicious cut of fish and then you turn it over and there's a whole other side of hidden meat crevices. You will find yourself eating the fins and the skin as if you've been stranded on a deserted island for the past year. But you won't care what others think. Because you are picking at your hamachi kama like Edward Chopstickhands, as if there's hidden gold inside. Because there is. Fishy, oily, skin-y, fin-y gold.
Posted by Jess at 10:21 AM No comments: 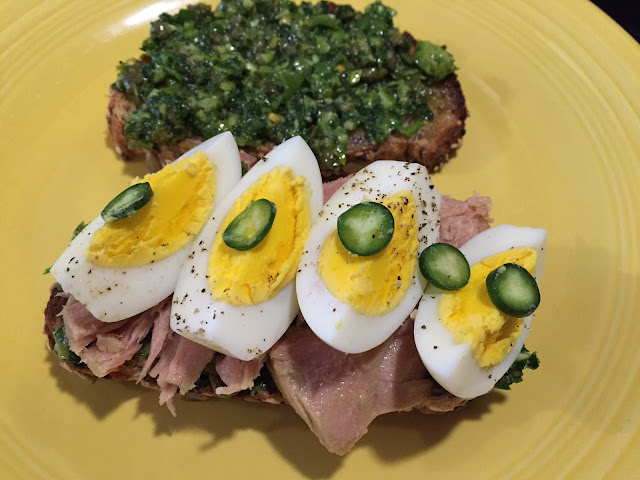 I love tuna, guys.  For me, it's just one of those foods that does it all.  It can be comfort food, it can be refreshing, it can be spicy, it can be easy, and it can be fancy.  This is a fancy jar of tuna: 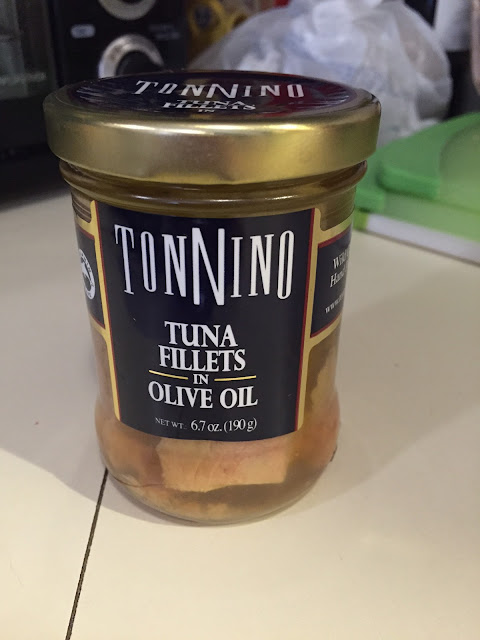 It's not cheap. It will cost you about $8/jar (and you may have to get it at a specialty store, because the grocery store that must not be named doesn't carry it.) And I would say use fresh here, but I was following orders from the New York Times cooking site (which has some amazing recipes).

I think what turned me on the most about this sandwich was the fact that there was no mayo involved. But let me tell you...there is so much flavor in this sandwich, that you won't miss mayo. And don't get me wrong, I love me a good old fashioned tuna, onion, celery and mayo sammy on some white bread.    But this sandwich is divine.  It's the best tuna sandwich I've ever eaten.

PS - If you're laying off the bread, it would be just as amazing all mashed up together in a bowl and eaten with a fork.
PS2 - Don't let anyone tell you eggs are bad for you.

DO NOT MAKE THIS ON FAT TUESDAY 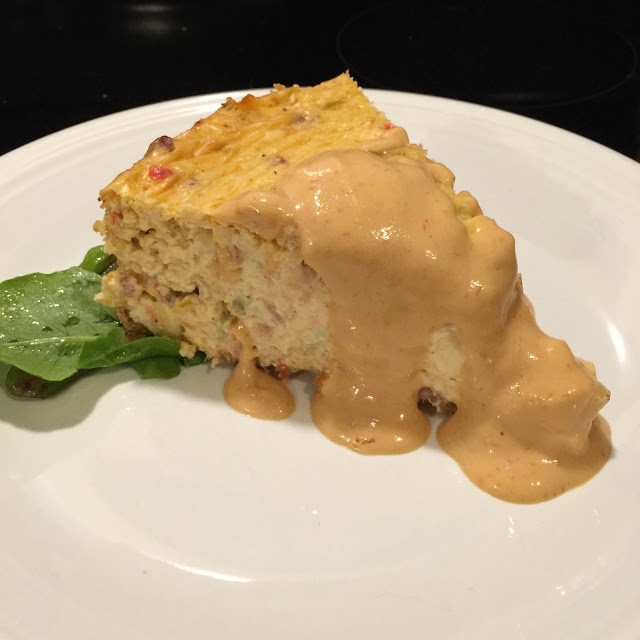 I remember in high school or college watching MTV while they were in New Orleans for Mardi Gras and thinking to myself, God, that is the last place on Earth I would want to be during that time. What I saw was a bunch of drunk, half-naked people acting like complete idiots, doing things they probably regret and wouldn't want their mothers to find out about, all to get on tv. I decided back then that Mardi Gras was not for me. I was wrong.  I take it all back.  Unless you are looking for that type of behavior, it's really not like that at all.

I finally went a few years ago (maybe 4) and I LOVED IT!  My experience was more about the parades, the floats, and catching the goodies thrown from the floats.  It was the happiness in the eyes of kids who had just caught something special thrown to them from an elaborately designed float.  It was the cheering on of the creative people everywhere.  It was a city, turned family for the weekend. It was eye candy on every corner. Carnival. History. Tradition. FUN. This year, Mardi Gras (aka, Fat Tuesday) is Tuesday, February 9th.

I was thumbing through a magazine at work one day and I came across this holy grail of a recipe: 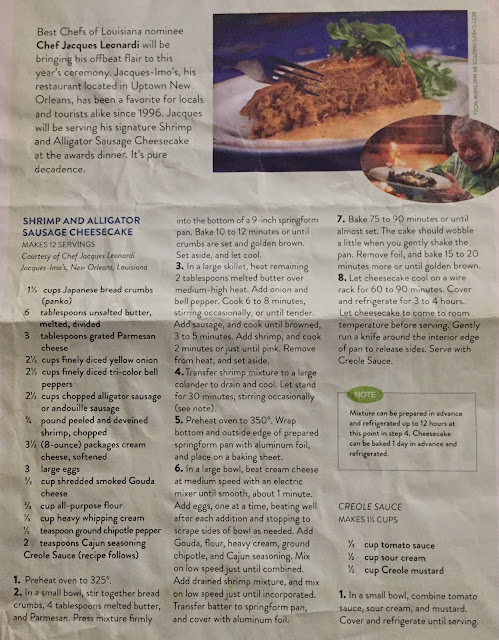 So I ripped it out of the magazine, shocked quite frankly, that Chef would even THINK about giving this recipe away. I mean is nothing sacred? And I held onto it until the next Fat Tuesday, when I would whip it up and serve it!  I was wrong, I take it all back.

I got home from work around 3 that day and started working on gathering the ingredients I needed, which included a trip to buy a springform pan, cause I didn't have one, and I couldn't find alligator sausage so I went with andouille (pronounced on-DOO-ee, for those of you who don't know). It's now 4:30, so I start the step by step process of making this thing. There is some prep work. Cutting onion and bell pepper.  Getting the cream cheese to a workable temp. Shredding cheese. Peeling and deveining shrimp (my least favorite kitchen task on the planet). None of which I thought about before hoping to have this dinner ready to surprise my biggest New Orleans fan and foodie when he walked in the door.

It's now 5:30, but I keep chipping away at each step.  And I'm doing it with the New Orleans Funk station blaring on Pandora, so there's really no stopping me now. So the cheesecake goes into the oven around 6:15, and I see that step number 7 says to bake for 90 minutes.  So ok, dinner will be ready at 7:45. That's a little late, but not too late for shrimp and andouille cheesecake from Jacques Imo's on Fat Tuesday. But then I see step 8.  I now have to let this bitch cool for 60-90 minutes and THEN cover and refrigerate it for 3-4 hours???  You have GOT to be kidding me?  I am crushed.  There will be no cheesecake tonight for Fat Tuesday.  So all my previous tasks have been a waste at this point.

But then I think to myself, no way am I going to spend all this time on this thing and not eat it tonight.  So I let it cool for 40 minutes and then I stick it into the freezer for 25 minutes.  Whip up the creole sauce and serve it around 9:00ish.  I hate eating this late.  But it's pretty spot on to the original recipe from Jacques Imo's, minus about 3 hours of time I should have let it sit and refrigerate and subbing the andouille for the alligator sausage.

The morals of the story are:
1. Always read a recipe from start to finish before diving into it head first hoping to have it ready at a reasonable hour.
2. Never judge anything by something you first saw on MTV.
3. Always partake in a day that encourages you to eat too much, drink too much, dance too much and laugh too much. Too much is good for you every once in a while!