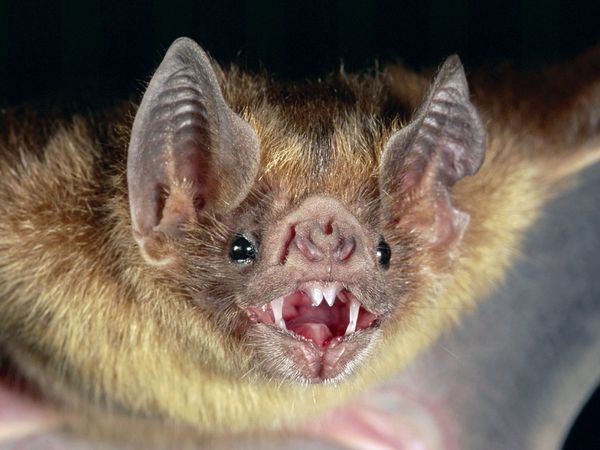 As you may have read from my previous blog, (thanks to all the new readers, I love you!) my mother worked a lot when we were growing up.  So sleep was precious to her.  Very precious.  If for some reason she was woken up by us we knew we were in BIG trouble.  We knew that if one of us wasn't dead or bleeding, to shut the hell up and not wake up mom.  Because of her need to sleep soundly, she has, as long as I can remember, slept with a fan running, so as to block out any peep of noise that might rouse her.  She also made sure we slept with fans running in our room, so as to drown out any noise we made, so that....you guessed it, we would not wake her up!

So imagine how distraught we must have been to discover a bat flying around our bedroom in the wee hours of the night.  We shared a room.  I think we were 4 and 8...MAYBE 5 and 9.  But regardless we were scared shit less when we saw this black shadow flapping around the ceiling, screeching like bats do.  Did I mention we were 4 and 8?  We grew up watching Salem's Lot...not this wussified Twilight stuff (and yes, due to one of our many brilliant baby sitters, we watched Salem's Lot at 4 and 8).  Do you realize what 4 and 8 year olds think bats are capable of?  We were SURE we would both become tangled-haired vampires come sunrise.  So we did what we both knew was sure to get us killed.  But we had no choice.  Be killed by a vampire bat or be killed by our mother.  At least let her get some satisfaction!  So we SCREAMED!!!

We screamed so loud that our mother raced into the room, flung open the door, turned the light on and growled at us, "THIS BETTER BE GOOD!"
"There's a bat in our room!" Leigh cried.
"Show me," she stood her ground, peering at us with I'm gonna murder you eyes.
"It was flying around, I SWEAR," Leigh looked toward me for back up.  I had one eye out of the covers.  I was terrified of all of them.  I didn't know which one would kill me first and for what reason, so I just shivered in fear under the covers.
"There's nothing in here, now go back to bed," our mother shouted.
"Bats are afraid of light, turn off the light and you'll see!"  Leigh begged!  So she did.  She turned off the light and slammed the door.
(PS - don't fault me for my inaccurate usage of quotes, punctuation, and what not.  I wasn't paying attention in class that day).

What happened next, you wonder?  Well, let me tell you.  The damn bat came out of hiding and started swooping down at us again!  Trying to kill us.  So, like any 4 and 8 year old, we screamed again.  And our mom came in, turned the light on, told us that if she had to come into our room again she was going to GIVE US SOMETHING TO SCREAM ABOUT, turned the light off and left.  Left us.  For dead.  With a vampire bat that was hair and blood hungry.  And it was summertime.  Our fan was in our window to keep us from dying of heat in our sleep.  So we both covered our heads and sweated our asses off all night, praying that we would wake up to see the sun.

We did sleep that night.  And we woke up the next day (obviously).  Eventually at some point during many hours of being terrified, the bat stopped.  It must have found some other blood-filled, hairy children to prey on.   And Leigh, the smart little detective that she was, wanted proof to show our mom that we weren't just playing an evil trick on her.  Nor were we crazy.  And she found it.  In the fan, in the window.  The bat had flown into the metal propeller of the fan, that was now covered in blood and bat fur.  So she ran in to tell our mom that there WAS a bat in our room.  We had proof.  And EVERYONE knows that bats don't like light (except apparently our mom).  So every time she turned on the light in our room, the bat hid.

Luckily we all lived that night.  Well, everyone but the bat.  And our mom from then on started to take our word when we'd tell her seemingly outrageous stories.  But Leigh, poor Leigh was the one who got stuck with taking the bat guts out to the trash that next morning.  And she never let our mom live it down.  Do you blame her?
Posted by Jess at 10:53 AM

OKAY! I read the bat, there is only one thing that you needed to add. I heard the bat get chewed up by the fan that night. We had taken some of the salts of plastic off the fan...don't ask me why...we were asshole kids...and after the second time SHE came in and told us she would give us something to scream about, you were crying A LOT! I told you to just put your head under the covers and you would be safe there...but I was sweating so bad...I had my head out for air when all of a sudden I heard...the bat fly into the fan and get churned up. That is when I knew it was finally safe to sleep. The next day I went to turn it off and I saw it curled up in the corner and I ran to get HER...and she made me take it to the dumpster. The weight of it in the trashbag made me sick to my stomach! I can STILL FEEL IT!!