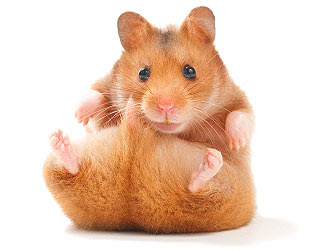 This is exactly what Hammy looked like.  He even did cute things like this.  I loved that little guy!
(Image from Google images)

When we finally moved into an actual house in Pittsburgh, (no more apartment living for us, we were movin' on up), I was able to talk my mom into letting me have hamsters.  A friend of mine had a baby pool full of the little fur balls (yes, a baby pool, these things procreate like crazy) and her mom didn't want them anymore, so I was lucky enough to now be the proud mommy of two hamsters.  What I am pretty sure I ended up with, was a momma hamster and a baby hamster.  One of them was old and frail looking.  The other was the best looking hamster I ever laid eyes on!  I can't for the life of me remember what I named the mom, but I named the baby Hammy (I know, REAL imaginative).  Finally, an animal I could love and pet on.  No more fish for this family!

A few days into my new fur babies, I noticed that the mom would constantly start fights with Hammy.  And Hammy would squeak and cry until I came to his rescue.  Maybe the mom knew that I thought Hammy was better looking.  We became quick friends, Hammy and I.  I would let him run around my bedroom and he would poop on everything and I would clean it up and hug him.  And my mom would constantly yell at me to put him back in the cage.  But he needed me.  I was saving his life!  His own mother wanted him dead.  Now that I think about it, maybe the mom started to resent Hammy for all the attention I was giving him.  I guess I wasn't as good of a hamster mom as I thought!

Well, we all know that all good things must come to an end.  And tragically, I woke up to a dead Hammy.  He was belly-up in the cage, his mother sniffing around, looking guilty (for all I know Hammy was the mom...who the hell knows with hamsters).  I had to go to school that morning.  But I wanted to give Hammy a proper burial.  So I picked him up out of his cage, kissed his little dead body, told him I'd be back for him and left him sitting on top of my vanity.  This scared the hell out of my mom when she later went into my room that day to find a dead rodent just sitting out, rigor-mortised to the table.  Ahhh, kids!

That afternoon I came home from school, put old Hammy in a zip lock bag, said my goodbyes and buried him next to our back door.  His mom lived quite a while after.  Abnormally long in our opinion.  We started to wonder if she would EVER die!  Eventually she did, but I didn't give her the same treatment that I gave Hammy.  She was mean.  Me and Hammy were tight.  We bonded.  I spoke Hammy.  And Hammy spoke Jessica.  I obviously was not getting enough attention!

Months passed, and Pet Cemetery came out and I realized how much I missed Hammy.  So I, the deranged child that I was, decided it was time to dig him back up and tell him goodbye one last time.  I knew he wouldn't come back to life.  But I wanted to tell him once more that he was my first real pet love.  Here's how I remember it.  It was raining.  There was a blueish tint to the night sky.  I had waited until my mom went to bed.  There was something very eerie about the wind.  I was obviously doing something I should've been doing.  When I finally pulled the zip lock bag up out of the dirt, I realized it had been a terrible idea.  My sweet, cute, huggable, furry Hammy was no longer cute or huggable.  He was now mushy, squishy, and nothing like the dead hamster I left for my mom to find.  I said my goodbyes, much more quickly than I had planned, I just wanted to get this nasty ass thing back into the ground and go back to bed!  That was the last time I saw Hammy.

I later confessed to my mom that I had dug Hammy up.  She was disgusted.  And probably worried that she may have raised some sort of psychopath of a daughter.  But it taught me a valuable lesson.  Love the things in your life dearly.  And when they are gone, by all means, think of them, write to them, talk to them and sing to them, but for God's Sake do NOT DIG THEM BACK UP!!