I'm trying to expand my food knowledge, along with my palate.  So I've been scoping out odd and frightening foods whenever I am out and about.  While in East Memphis at the Fresh Market the other day, my eyes were drawn to a package of wild mushrooms.  The package consisted of French Horn, Chanterelle and Enokitake mushrooms.  Now I admit, mushrooms are a food that scare me.  I usually stick to the trusty old white button mushroom.  I have steered clear of portabellas ever since I decided to eat my first portabella sandwich, after a night of way too many Samuel's Adams Honey Porter beers during my WVU days. 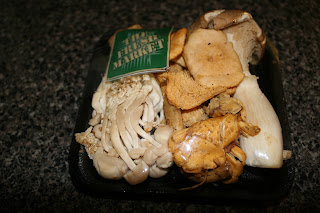 Mushrooms, in general, are just weird.  They're a fungus.  I mean, it's kinda like, "Hey guys, wanna try the new Ringworm Wrap? I hear it's Awwwwwwesooooome!"  I kid.  But seriously, they are like cheese.  And I love cheese, but cheese can be scary.  It's stinky, its got mold on it.  But we eat it and love it.  But every once in a while, someone cuts the literal cheese and people go running!  Mushrooms, for me, are in the same boat, or should I say the same pile of poo??

Anyway, I dropped all my food fears on this one and went for it.  Of course the first thing that came to my mind was risotto, seeing as how it's been WAY too long since my last visit to Epcot's Le Cellier in Canada.  You have to call months in advance to eat there...probably because they have the best mushroom risotto I've ever eaten, not to mention delicious steaks!

Here's what I did:
I simmered about 5 cups of chicken broth (you want to have warm broth).  I wiped off any dirt on the mushrooms and chopped them up.  Chopped up a shallot and 3 cloves of garlic and I sauteed these items in olive oil (about 2 tbsp's) and butter (2 tbsp's) in a large pot on medium heat.  Once everyone in the pot was soft and happy, I added 1 cup of Arborio Rice (you can't use Uncle Ben's when making Risotto.  Here's why) and stirred it around for about 2 minutes to cover each grain with olive oil, and butter and get it nice and toasty.  I then added in a cup of white wine.  Stir the wine and rice until there's almost no liquid left.  Then add in chicken broth...one cup at a time, stirring in the broth until it's almost gone, then add in the next cup.  This process takes about 25 minutes.  And the only way to really know when it's done (at least for me) is to try it.  It'll be really creamy!  When you get it to your desired consistency (I like mine with a little bite - al dente, per say) you're ready to add in a cup of Parmesan cheese, some chopped up thyme (about a tablespoon) and another pat of butter.

Now..... eat it VERY quickly, so that no one else gets any, because you aren't going to want to share!  And Fresh Market, WVU, Cook's Illustrated, Le Cellier and Epcot...I'll be awaiting my checks in the mail for the plugs!
Posted by Jess at 9:57 AM

Girl! This sounds AMAZING! I gotta try it.