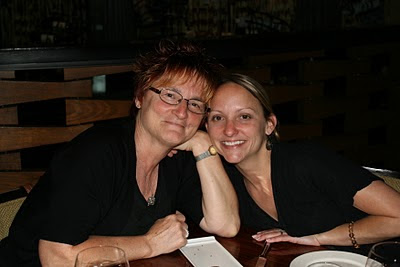 Every year or so, my mom and I try to take a mother/daughter vacation.  Mostly because I live 900 miles away from her, but am a total momma's girl, but also because we like each others company.  We've been to Vegas, where we saw the Cirque du Soleil show, The Beatles Love (a must see if you haven't seen it).  We ate at Bobby Flay's Mesa Grill and Wolfgang Puck's Spago.  We visited the Qua Spa where we enjoyed an Arctic Ice Room, which is sort of a steam room, except instead of steam, snow falls from above and it's.....well, freezing! We swam at the topless pool, though neither of us went topless, because we didn't have the balls, or shall I say, the fake tits, to bare our beauties.

We went to Chicago and saw the Blue Man Group (another must see - especially in the theater in Chicago), shopped the Magnificent Mile, though we couldn't afford to buy anything, ate at Smith and Wollensky's Steakhouse, and ate at our first Brazilian steakhouse Fogo de Chao, which is like being served meat by the meat mafia, a meat cartel, if you will.

But usually, we go to Orlando, because as many of you know, my mom is addicted to the Happiest Place on Earth - Disneyworld.  She literally wants her ashes scattered all over the place when she dies (and yes, I am currently writing a book about doing that).  In Orlando, we've eaten at Emeril's Orlando, as well as his other restaurant, Tchoup Chop.  We've been to every Disney park (minus the water parks...we always eat too much to squeeze our bloated selves into bathing suits and mingle with thousands of other barely clothed tourists) and the Universal Studios parks.  We even braved Halloween Horror Nights at Universal Studios, where we were both scared so shitless we literally left the park running and screaming!

Obviously, you see a theme developing.  We eat and we eat and we eat.  But luckily we go to places that require a TON of walking, so between eating, we hobble through the cities we're in so as to not have to buy bigger-sized clothing when we get home.  So here's the tale of our latest mother/daughter pornographood venture, in photos.  Pornographood photos.  Please make sure you look at these photos in private, as I can not be held responsible for any loud moans and groans, nor drooling you may experience. 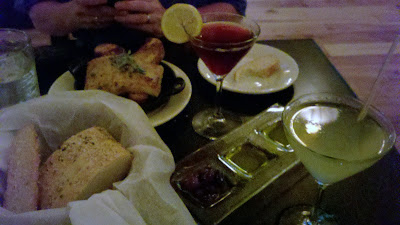 Cat Cora's Kouzzina, the Eco-tini on the right came with an Acai seed bracelet! I left my good camera in the car for this one.  The picture doesn't really do it justice, but there's grilled Greek cheese with lemon, oregano and capers at the top left and kalamata olives and two different types of olive oil, so fruity and tasty I could have done shots of it. 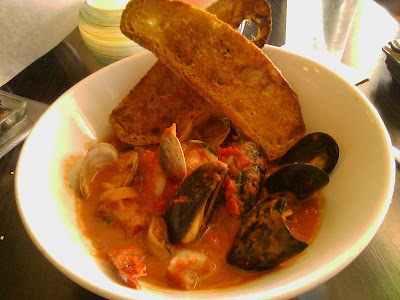 Fisherman's Stew at Kouzzina - with clams, mussels, delicate, perfectly cooked fish and shrimp.  The broth is actually making me drool right now.  I seriously just closed my eyes and I could taste it.  It's the best I've ever had, made with Ouzo butter...OPA!! 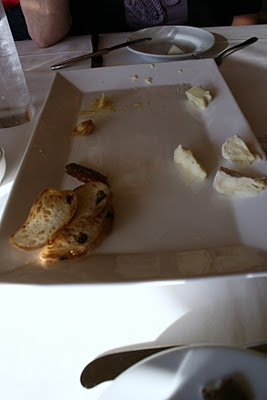 The next day, we had reservations at the California Grill.  Above is what remains of the cheese board we had at the California Grill, I forgot to take a picture before we ate all the cheese.  But it came with the following cheeses: Seahive, Mt. Tam, Drunken Goat Cheese, Fromage de Affinois de Brebis, and Cambozola.  Then for accouterments (I just like saying that word, makes me feel so smart and French), there were candied macadamia nuts, pear jelly, honey with real honey comb, figs and olive bread.  I think my favorite was the Drunken Goat. 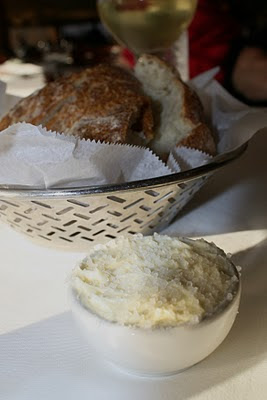 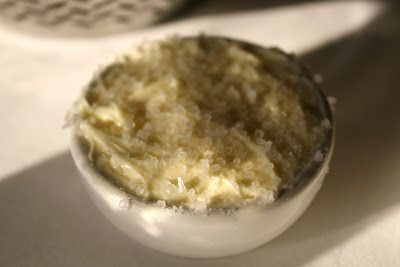 I can't look at this picture without licking my lips. 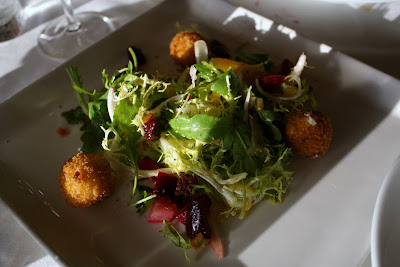 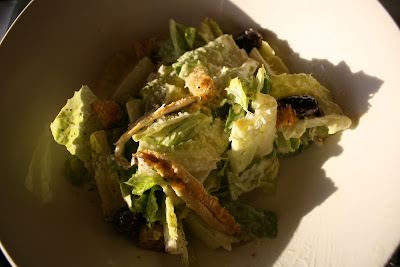 A delicious take on Caesar Salad with anchovies and kalamata olives. 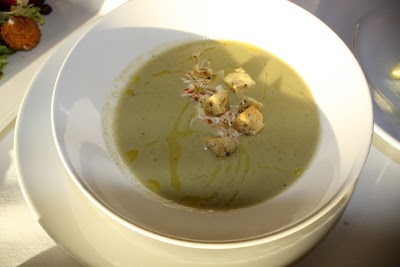 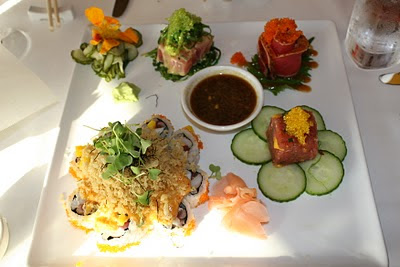 The Pornogra-PHOOD-iest of them all - Tuna 3 ways.  Poke (pronounced POH-keh, so don't go asking for tuna poke, or you'll look like an idiot), Tartare, and Tataki.  And that mound on the bottom left is a Spicy Kazan Roll with crab, shrimp, scallops, tuna and a fireball sauce.  This plate was orgasmic, to say the least. 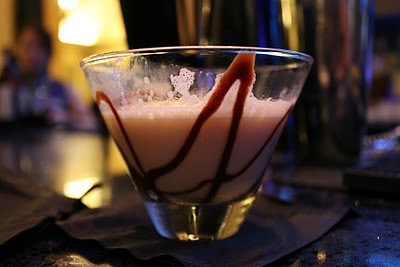 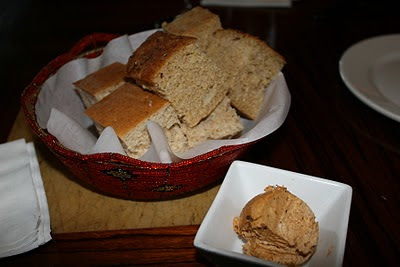 The next night we went to Jiko, an African inspired restaurant at Animal Kingdom Lodge.  This was our starter of honey bread, which was heavenly and tamarind spiced butter.  It was like spreading pumpkin pie on bread...it was like dessert.  It was like heaven.  It was like effin amazing. But I couldn't get the song Biko, by Peter Gabriel, out of my head the entire time here. 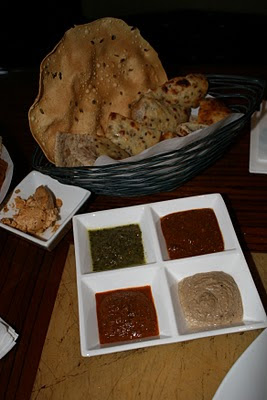 This was the Taste of Africa appetizer with an assortment of dips, homemade Naan, papadums and pita.  My dad used to make us papadums when we were kids and we loved them, but we wore ourselves out on them.  I have fallen back in love with them again.  And the dips were amazing.  Some with such odd spices, it was hard to decide if I liked it or not.  But I kept eating it, so my guess is, I liked it. 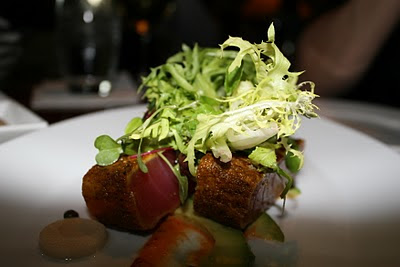 Mitmita Spiced Ahi Tuna Tataki with hearts of palm salad, avocado, and peppadew-cilantro vinaigrette.  This was to die for. I could eat this every day. 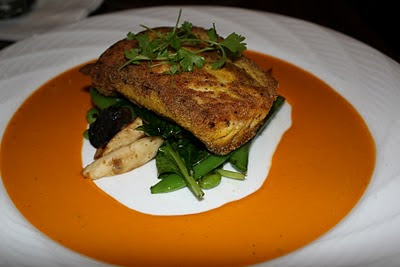 Maize-crusted wild sea bass with parsnips that were incredible and a tomato butter hollandaise. 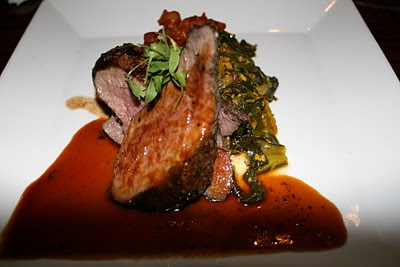 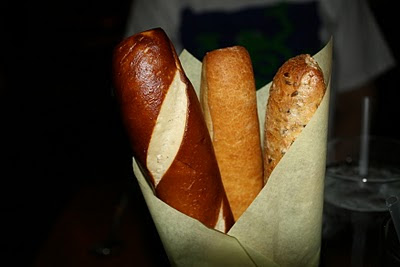 The next night we stopped at Le Cellier in Canada at Epcot.  They start you off with an assortment of breads, the pretzel bread being the most delicious.  Luckily for me, my mom found the recipe and tried it, so I will soon be sharing with you! 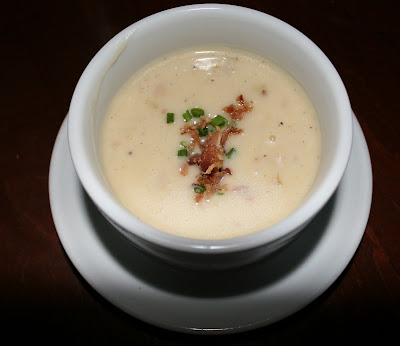 If you ever go to this restaurant, order this soup.  It is the best tasting soup in the entire world.  It's Canadian Cheddar Cheese Soup made with Moosehead Beer and bacon.  You will need to bring a change of panties after this one.  I'm not kidding. 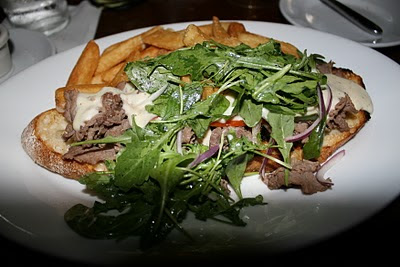 I wanted to try something new this time, so I went with the Open-Faced Canadian Cheesesteak Sandwich with sauteed onions and peppers and a Boursin cheese sauce, topped with arugula.  Though I kinda wished I had stuck to my regular...luckily my mom wasn't straying from what we know is the best thing here: 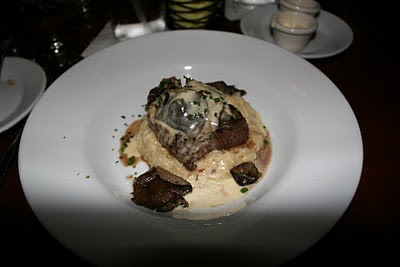 Mushroom Filet Mignon with Wild Mushroom Risotto, finished with white truffle herb-butter.  And now that it's fresh in my mind and in my mouth, I think I know how to recreate this risotto.   Better yet, bring 2 pairs of panties.  You're going to need another pair after you eat this. 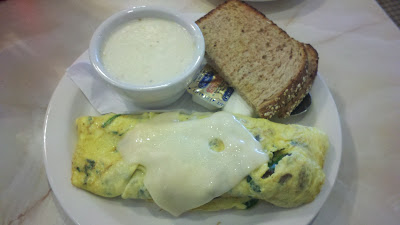 And finally, we finished our pornographood vacation at the Market Street Cafe in Celebration, Florida.  A place that holds a plaque with my grandmother's name on it, because she ate there so much.  And I know why.  They have the best grits in the entire universe.  But when I asked the waiter what type of grits they used, he said "Quaker".  I call Liar.  Quaker don't make no damn grits as good as these babies!  The swiss cheese omelet with mushrooms and spinach is really delicious too. 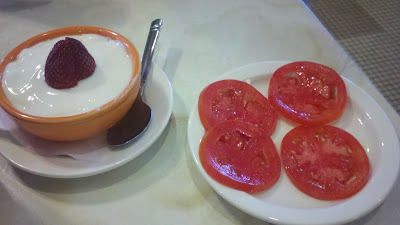 And we had to finish our weekend with something healthy.  A creamy bowl of yogurt on top of cinnamon-y granola, with a perfectly ripened strawberry and sliced tomatoes, so ripe they tasted like a freakin' watermelon.  Ahhhh Florida, I love you and your fresh fruits!
The best thing about this Pornographood vacation...I didn't gain a single pound, because we probably walked 10 miles a day.  I love you mom and your love of food, and your love for me, and your love of me, loving food.  Thanks again for an awesome trip!  We must do it again.  And to everyone else - go get a tissue and wipe the drool off your computer.
Posted by Jess at 7:17 PM

wow, that was wonderful. You are pretty amazing.

Oh the tuna looked fantastic, the soup amazing, grits done well rock, and the fishermans soup I tried to eat off the screen on my droid! Yum food adventure! Thank you, now I want to eat too much food...

i ate dinner then read this and now i'm hungry. i could also eat the tuna everyday :)

Do you think you guys might want to adopt me before your next trip? It all looks amazing! Especially that tuna plate.

Wow! That looked fun. Goat Cheese croutons are available as an appetizer at Sweet Grass. :)