I Want You...To Wonton Me 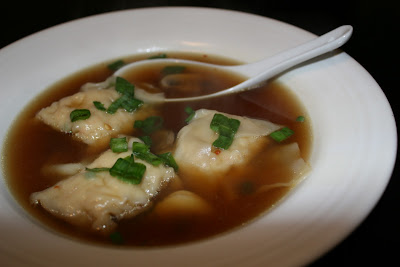 Twas a cold Memphis evening, and this Bitch in the Kitch,
had a craving for soup, so I scratched that itch.
I went to the fridge, and that's where it dawned,
I had all of the fixings, for some good ol' wontons. (I can't help myself sometimes)

I had ground chicken that I needed to cook, but was tired of the usual fare.  So I bought some shrimp, and put the chicken, shrimp, 3 cloves of garlic, a big chunk of peeled ginger, crushed red pepper, scallions, soy sauce, chili oil, rice wine vinegar, and some brown sugar into a food processor, until I had a bowl full of mush.  Chunky mush though, not baby food mush.  Then I got out some wonton wrappers and filled them with a tablespoon or so of the mush, folded those puppies up, using water around the edges like glue.  They looked like this, surely not the traditional dumpling, but I'm not very well versed in Asian cooking, so whatever, haters. 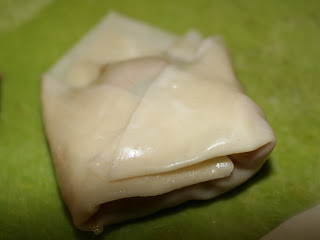 Then I put a pot on the stove, added veggie and sesame oil, 5 smashed cloves of garlic, more ginger and crushed red pepper, chicken broth, sliced mushrooms and scallions and boiled them together for about 20 minutes.  Once I had made all my wontons (which takes FOREVER), I dropped them into the simmering soup until they floated.

It was great.  I was very proud of myself for just throwing it all together and coming up with a delicious soup in no time, but next time, I will add a lot more garlic, ginger, crushed red pepper and soy to the dumplings, because I think those little purses of pleasure lacked some serious flavor-flave.
Posted by Jess at 2:36 PM

I would love to see your wontons...Anonymous wuss.