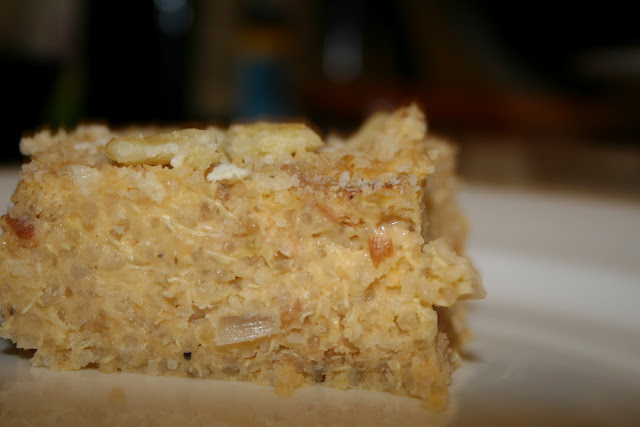 Who'da thunk after my first quinoa blog, I'd turn into such a quinoa freak?  Well I have officially hopped on the quinoa train.  And I am officially addicted to Pinterest, where I found this delicious idea to make quinoa mac n' cheese from a blog called Iowa Girl Eats.  I didn't exactly follow her instructions.  Actually, I rarely follow instructions, but here is how you make this delicious dish, Bitch in the Kitch style.  And I am aware that this dish should be called Quinoa and Cheese, seeing as how there's no mac...but don't be so critical...Jeez.

Here's What You Need:
1 cup of cooked quinoa (which actually yields a ton of quinoa) - cooked according to the package directions.
6 pieces of cooked bacon
2-3 cups of cheese - your favorite kind.  I used a combination of Hoop Cheese and Sharp Cheddar from my Amish friends at Troyer Farms...you really just have to taste it to make sure it's cheesy enough for you...if there even is such a thing as Cheesy Enough.
1 small onion - diced
2 cloves of garlic - minced (I truly don't know the difference between minced and diced...I just like to dice my onion and mince my garlic - if this offends you, I apologize)
1 cup of milk
1 egg
breadcrumbs (or anything bready, I used saltines because I was out of bread crumbs)
Olive oil to cook onion/garlic and for drizzling on the top before baking.

Here's What You Do:
Preheat oven to 350 degrees.  Cook the bacon, and chop into small pieces, set aside.  Cook the quinoa.  Cook the garlic and onion in a little olive oil.  Add garlic, onion, cheese, bacon, milk and egg to the quinoa.  Stir and add in salt and pepper.

Taste it...be careful...there's raw egg...so only taste if you aren't preggers or don't have a disease that compromises your immune system (such as Lupus...if you don't know what lupus is, learn up...my best friend has it...it's a mother fucker.  We need to find a cure.  She shouldn't be 33 years old and having her hips replaced....F-U Lupus.)

Place quinoa mixture in a square baking dish that has been sprayed generously with Pam.  Top with breadcrumbs.  Drizzle the top with olive oil.  Bake for 25 minutes or until breadcrumbs are browned.

Eat as a main course.  Top with short ribs (as I did).  Add herbs (I wish I had). Whatever you want.  Quinoa is so damn versatile, you can practically do anything in the world with it.  But make it.  Because it's a superfood.  And who doesn't like super food?? 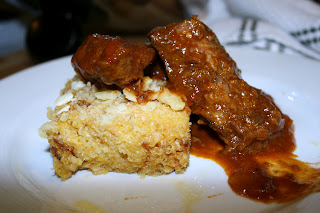