How to Roast Chicken and Not Be an Idiot 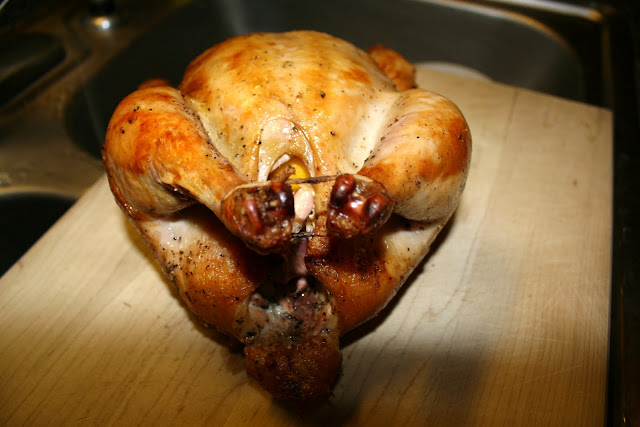 I've had an uncontrollable urge to try beer can chicken for quite some time now.  I just like the idea of cracking a can of beer, taking a few gulps, plopping a bird ass-down on to said can of beer and grilling her up while the beer steams her from the inside out.  Sounds exciting.  Adventurous.  I've never done it.  And I want to.  But I live in Memphis, TN.  It's hotter than hell here (100 degrees the day I made this meal, to be exact).  And the thought of spending most of my day outside, babysitting a bird on a grill over indirect heat makes me want to stab myself in the eye with a spoon.  So what did I do instead?  I turned my oven on to 425, cranked my air on to a cool 65 degrees, turned every fan in the house on and I roasted myself a chicken in June in Memphis.  I wanted to give all you loving readers something to do while you're all pretending to be working hard at the office, since I will be, once again, slacking on my blog this week!

I went with the lovely Ina Garten's recipe with a few tweaks, because her husband loves chicken.  So if she can't roast a good chicken for the lovely Jeffrey, who the hell can??  Here's the recipe.  And here are the tweaks I made:

I only stuffed my bird with 1/2 a lemon and 1 whole bulb of garlic cut in half, because that's all I could fit inside my bird.  I also added only 1 1/2 lemons to the roasting pan and added in 1 whole onion, peeled and separated.  Additionally, I loosely topped my chicken with aluminum foil because all that bacon on top starts to spatter and there's no freakin' way I'm cleaning my oven tonight, or ever for that matter, if I can help it.  After the one hour is up and you remove the bacon, I also removed the aluminum foil so the chicken would brown up.  And I didn't use the wine in the gravy...I just doubled the amount of stock.  Simply because I'll be playing with alcohol all week, I am avoiding it until then.

I am the bar manager/bartender of a bad ass music venue in town, Minglewood Hall.  I love my job.  I get paid to see live music, one of my favorite things to do in the world.  I clean up after people all night.  I deal with drunken idiots for 5, sometimes more, straight hours a night.  I have to explain to people that I am not the one who has been drinking all night long.  You, sir, are the one who just ordered a vodka and Grey Goose.  You, ma'am, are the dumbass that just asked me for an umbrella sour.  You do realize you are drinking Amaretto, right?  AM-A-RET-TO.  Not Um-ba-rell-a.  At least learn what you're drinking if you're going to let it make you act more stupid than you already are.  Yes, I promise I poured you the correct amount of liquor.  That's my job.  If you want more, you pay for more.  If you act like a jerk, you will get less.  I'm not going to risk my job for a $7 drink, you asshole.  I don't care if you say you're going to tip me "good".  Usually that means you aren't or you are going to give me a dollar.  A dollar isn't good.  Don't expect me to go out of my way for you.  Try to come up to the bar slurring and you get cut off.  Try to argue that you're not too drunk, and you get kicked out.  Simple rules people.  Simple.

I have just provided many simple recipes for you in this blog.  Recipes for great food and recipes for not acting like an idiot.  Please use them.  You will not be disappointed.
Posted by Jess at 12:13 PM

clever girl, using the oven and turning ac down super low! i do the same, as it is 103 right now over here. in fact, i added a small window unit in living area to help my old ac unit not freeze up when i need it cold to fight the oven heat. the chicken recipe you used sounds amazing, and have never heard of bacon on top. leave it to ina to come up with that fantastic idea! i bet it just melted in your mouth!

Where are you at these days K? Arizona?? I can't keep track of you!!

The bacon on top added great flavor and it was REALLY juicy!