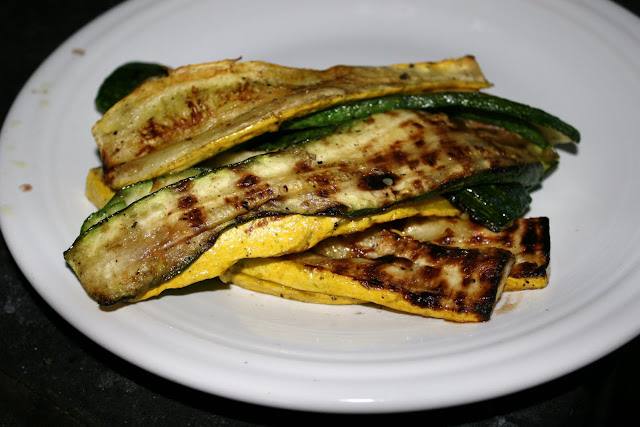 Ok, look.  I love fried food as much as the next guy, but there comes a time when I crave something that has NOT taken a bath in hot grease. And even more so...when I'm at the beach, the last thing I want is something fried.  Logistically it just doesn't make sense to eat fried food, while walking around mostly naked in the hot ass sun.

So last week, some friends and I took a vacation to the lovely Gulf Shores, Alabama.  We had sooo much fun.  I saw some of my favorite bands play on the beach, laughed so hard at times I would hurt the next day, walked for miles and miles on the soft, white sand, got beat up in the big, blue gulf. Gulf Shores is a beautiful place. The people are extra friendly, it IS the South of course, staying on the beach is relatively cheap,  there are a lot of fun things to do and see, and they have an abundance of fried seafood.  That's right.  If you want fried shrimp, fried clams, fried fish, fried oysters, fried onions, fried fritters, fried tomatoes, fried crab, fried scallops, then LA or Lower Alabama (LA is what the locals call it, makes it more Paris Hilton-y) is the place for you.

In fact, they love their fried food so much that they will UPCHARGE you if you want yours steamed or grilled.  Yes, I said that correctly.  We went to a restaurant in Gulf Shores, and they had an All You Can Eat clam special.  Well, I can eat about 1,000 clams by myself, so I was happy as a clam, you might say.  Until our waitress informed us that the clams were fried, but they would gladly steam them for more money.  Hmmm....So, let me get this straight.  You are going to charge me MORE for taking a clam, in its happy little clam shell, putting it in a steamer until it opens and bringing that to me to eat, than you are going to charge me to take the clam, pry open its shell, scrape out the clam, bread the clam, fry the clam, put the clam on paper towels so it's not dripping with grease, and THEN bring it to me.  Hmm....makes NO damn sense to me, but does explain why Alabama was named the second fattest state in 2010.

So here's an EASY recipe for grilled zucchini.  I guess what my point is, is that your food tastes so much better in the state closest to its original form.  Why are you always trying to hide what you're eating with grease?  Just don't eat it, if you don't like it.  It's that simple.

Oh and in case you were wondering.... No, you couldn't see oil streaks in the Gulf of Mexico, though I still boycott BP...(If you'd like to donate towards disaster recovery in the Gulf, please go to this site - oh, and my best friend designed the website...kudos to Muscle + Bone for their efforts on doing the world some much needed good!)
Posted by Jess at 12:38 PM