MTV, GN'R and other ramblings 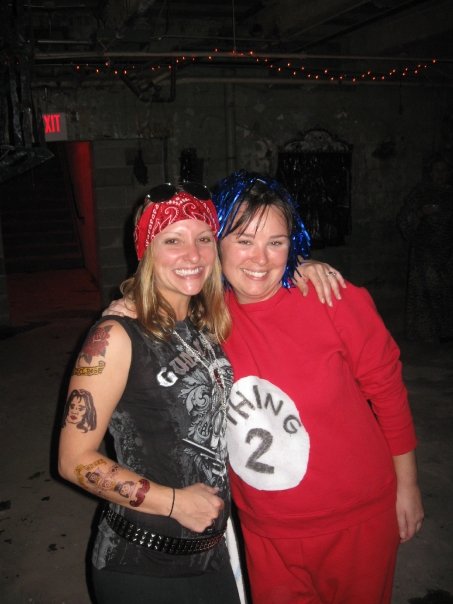 Me as Axl, Halloween 2009 with one of my favorite partners in crime.

I've always been a fan of music.  You might think it's odd to say that, because who doesn't love music?  But there are actually people out there who don't.  My parents named me Jessica after the Allman Brothers' song. My sister and I used to hang out with our babysitter's older daughter and stand around a record player singing Funky Town by Lipps Inc. at the top of our lungs. And then, we heard about Music Television aka MTV.  Our neighbors told us if we turned the dial on our tv enough, we could tune in MTV.  So we rushed home, took over the television and began turning the knob round and round and round and round and round, for what seemed like an eternity.  It was probably only a few minutes in reality, but to a 4 and 8 year old it seemed like a day.  But eventually it worked and music television would be on our tv all day long.  I mean ALL DAY long.  We would sit in front of the tv, enamored by all these musical geniuses and their video creations.  I would study these songs.  I would write down the lyrics.  I would make dance routines.  I wanted to be each and every one of them.  In fact, I was Madonna or Cyndi Lauper interchangeably for practically every Halloween.

When I got a little older, I would hold singing competitions in the neighborhood.  I invented The Voice.  You had to be able to sing (on perfect pitch) Sheena Easton's part in U Got The Look by Prince to be in my special club.  I was a little tough on all the kids, but team Jessica had to be the best.  And we were.  I continued my love of music and all things music when hair bands became popular.  I knew every word to every Motley Crue, Skid Row, Guns N' Roses, Cinderella, and Poison song.  Then I got into rap.  Dirty rap.  The dirtier the better.  The more vulgar, the better.  And my mom was ok with me blasting Easy E and 2 Live Crew when I was 14.  Thanks mom!

Then came grunge.  Soundgarden, Alice in Chains, Nirvana, Pearl Jam. Then I went back to Classic Rock.  Led Zeppelin, Rolling Stones, Pink Floyd, The Beatles.  Then I moved away to college and discovered Phish, Dave Matthews, Widespread Panic.  Then came my chick phase... Indigo Girls, Natalie Merchant, Tracy Chapman.  I got my ass kicked at a Lynyrd Skynyrd concert and I kicked a girls' ass at a Phil & Friends show.  You tell me a time we were together and I will tell you what kind of music we were listening to. And I haven't even touched the surface of all the music out there.  There is so much!

I'm rambling.  The point is, I love music. I will pay a lot of money to see music.  I am sad that I have missed the opportunity to see some of the greats. So when I heard that Gun N' Roses were going to play again, we jumped at the opportunity to go. Guns N' Roses was the backdrop for a big chunk of my high school career.  I would sit in a friend's bedroom and listen to both Use Your Illusions for hours on end while they played video games. And so we found ourselves in Las Vegas. And when our plane landed we heard that Axl had broken his foot.  So our hearts dropped.  Because Axl has a reputation for being a prima donna.  So we worried that he was going to bail on the show and our trip would have been for nothing.  But yay Axl!  You finally took some responsibility.  And you showed up on time.  And you fucking rocked it!  We had a great time. We met people from Germany, Belgium, Sweden, New Zealand, Brussels. And you know how I know I had fun?  I didn't take a single picture.  Nope.  Because I was tuned in. Just like I tuned in MTV all those years ago.