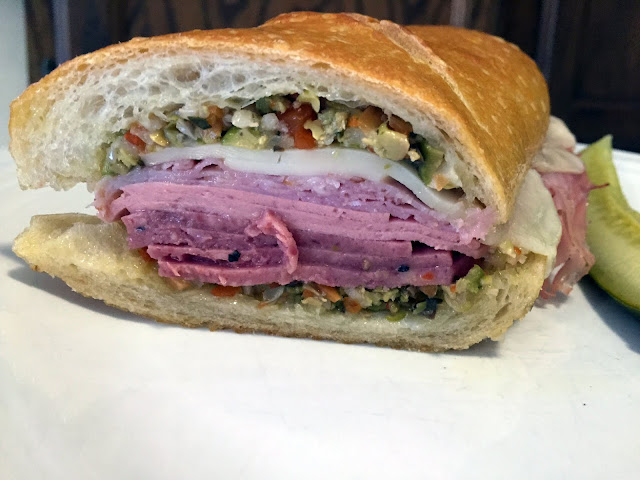 Usually when I go grocery shopping without a plan, I come back with things I don't need.  A block of cheese I've never had.  Chocolate. Chips. A weird fruit or vegetable I've never tried. But the other day I came back with some shit I would never in a million years buy.  I'm not sure what the grocery Gods were trying to tell me, but they took over my body and forced me to buy salami and bologna.  I can't tell you the last time I bought bologna.  My guess is about 20 years ago.  And once I bought that, I found myself in the olive aisle, buying an olive spread.  And that's when it hit me. The grocery Gods wanted me to make a muffuletta. And I don't mess with the grocery Gods. They know what's up.  Maybe I needed some New Orleans in my life. Who knows?  I'll tell you who knows... the GROCERY GODS! So I continued on and bought some provolone and some ham.

And then I got to the bread section and wasn't happy with any of my choices.  So on to another store I went.  And their bread options were better, but still, nothing was really blowing up my skirt, so I ended up with a sourdough baguette.  Now don't get all up in arms that I didn't use the correct type of meat, cheese or bread.  Normally a muffuletta is made with ham, salami, mortadella, provolone and mozzarella on an Italian sesame bread.  But this is a not a normal muffuletta.  This is MY muffuletta.  Not yours.  If you want to tell me how wrong I'm doing it, make your own damn muffuletta.  And please don't get me started on how to pronounce it.  That's a whole argument in itself.  Just eat it, don't dwell on it.

After I gathered all the ingredients, I went home and knocked this bad boy out.  And I must say, it was damn good. So if you get a hankerin' for a muff, all you have to do is this:

Here's What You Need: 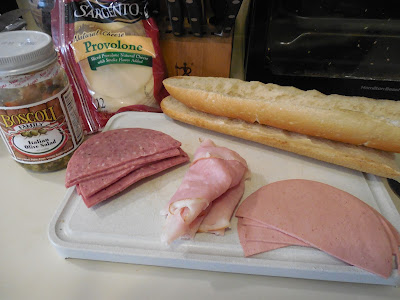 Here's What You Do:
Preheat oven to 350.  Cut your loaf in half and scoop out the bread so you have hollowed out bread.  Put the bread in the oven for a few minutes, just to get it a little toasty.  DON'T FORGET ABOUT THE BREAD.  Put your olive salad in a food processor and process it until you have a fine paste.  Take your toasty, unburnt bread out of the oven.  Coat the bottom of your bread with 1/2 of the olive salad (I used a lot because I love olive salad and I like my muffuletta to drip down my arms as I eat it).  Next place the meats and then the cheese or cheeses on.  Top the other half of the bread with olive salad and then place it in the oven for about 20 minutes until the cheese is melty and the bread is crusty.

Another way I do this, is I heat up all the meats first, then assemble the sandwich, then cook for about 5 minutes.  Do what you like.  Either way, you can't go wrong.  It's just a fine ass sandwich.
Posted by Jess at 3:03 PM