I get mad cravings.  Some of my days are entirely ruined because I can't satisfy a craving I have.  I mean seriously, what's a girl got to do to get an extra toasted Everything bagel with a little butter?? And by Everything I mean salt, poppy seeds, caraway seeds, sesame seeds, garlic and onion.  Don't try to give me a bagel with sesame and poppy seeds and call it an Everything bagel...now them's are fightin' words.  And by toasted, I mean browned and crunchy.  Not white and dried out.  And by a little butter, I mean spread a light coating of butter on.  Don't get out your boat oar to schmear so much butter on that I have to get my canoe and put on my life jacket to take a single bite.

See, I get cravings.  And they are specific.  And I want them to be made the exact way I dream them up.  So the other day I was craving a Cuban sandwich.  I've only taken a bite of someone's Cuban before.  I have never actually ordered one.  So I figured that I would just make my own, because that's the only way I was going to get it like I wanted it.  And here's how I did it. 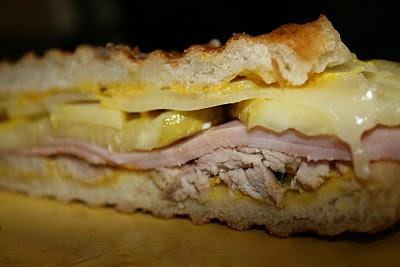 I took a pork tenderloin and poked a million holes in it and marinated it in orange juice, garlic, salt & pepper and lime juice for about 4 hours.  Then I roasted it at 325 for about 30 minutes.  Then I sliced it paper thin.  Then I got some french bread, the soft kind, not the kind that breaks your teeth (though I love that kind) and I cut it in half and put yellow mustard on both sides.  Then I put the thinly sliced pork on the bottom, topped that with Virginia baked ham from the deli.  Then I topped the ham with dill pickles and then Swiss cheese.  Then I topped it with the other half of the bread and panini pressed the whole thing.  It was toasted perfectly, melty, mustardy, porky, hammy and cheesy!  And I couldn't have bought it anywhere and had it taste as good.  Try it! 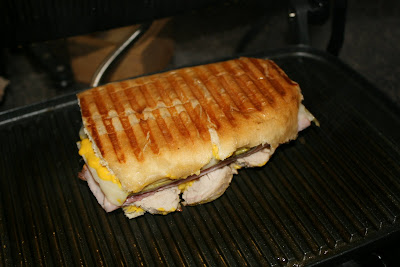